Part 6 focussed on the patch antenna being used as the feed for the 80cm dish. In this part I describe the efforts I have made to improve the 2.4GHz transmit amplifier, originally described in part 1 and part 4. In particular I wanted to see if the power output could be increased.

My first problem is that I cannot measure the actual RF output, as I do not have a microwave power meter. However, I can measure the DC current drawn from the power supply, which gives an indication of output power. I found some data on the internet relating DC supply current of the EP-AB003 amplifier vs supply current (www.ra3apw.ru/qo-100/qo-100-stc7031_appn2/). Another crude way of evaluating improvements in uplink power is to monitor the downlink from the satellite.

Some radio amateurs claim that they have increased the gain and/or output power of the EP-AB003 amplifier by bypassing the Tx/Rx switching devices and reducing the voltage drop on the power PCB tracks (traces). I do not need the amplifier to switch between transmit and receive since I previously modified it to be stuck permanently in transmit mode. The photos show the mods I carried out. Bypassing the Tx/Rx switching device on the input side was very difficult to do and this put me off doing a similar mod on the output switching device.


Unfortunately the modifications produced no measurable improvement in the amplifier performance.


Increasing the Gain of the Transmit Chain

The new 2.4GHz amplifier consumes a lot more current than the SPF5189Z, therefore I have had to upgrade the heatsinking on the 5V linear regulator. 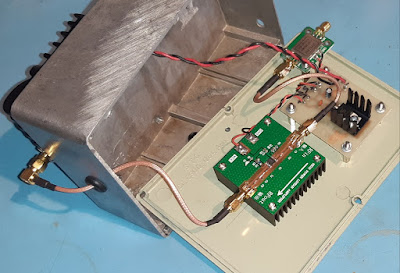 With maximum drive from the Pluto SDR, the amplifier system draws 1.655 A from a 12V supply. At this drive level the 1W amplifier draws 300mA. Allowing 75mA for the SPF5189Z amplifier, this implies the EB-AB003 power amplifier is drawing 1.28 A. I reckon this corresponds with an RF output power of around 2.5 Watts.

The modifications have not resulted in any measurable increase in RF output power. So has this all been a waste of time? I do not think so.