My Adventures in Satellite Communications - Part 5

In Part 4 I described the assembly of 2.4GHz uplink electronics. I then addressed my attention on improving the uplink antenna.

I recently purchased an 80cm offset dish with the intention of using it for the uplink and, eventually, for the downlink as well. The next decision was how to feed it. The diagram below shows the principle of a parabolic dish. 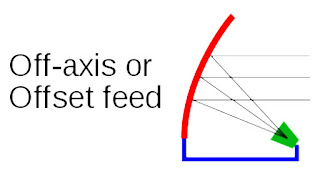 The feed, a small antenna, produces the radio signal, which is then reflected back, focussed into a narrow beam. Often a small helical antenna is used to feed the dish for the QO-100 uplink. This is ideal as it produces the circular polarisation required by the satellite. Although helical antennas are simple to make, I decided against doing this as I do not have suitable equipment for measuring impedance or VSWR at microwave frequencies. To start with I decided to use a small yagi. High gain yagi designs are unsuitable as their narrow beamwidth would mean that the full dish area is not fully ‘illuminated’. I decided to cut-down my existing wifi yagi, removing most of the director elements, to increase its beamwidth. I suspected that removing elements would cause the impedance to increase, but had no way of measuring this. So I settled at retaining three of the directors, as a poor VSWR would increase the loss in the coax feeder. The photo below shows the assembled dish with the 5-element yagi at the focal point. 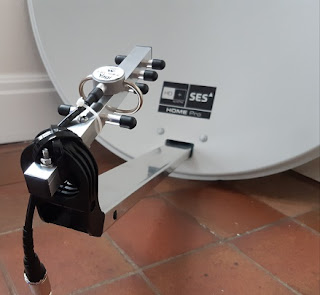 The dish was mounted in approximately the same position as the long yagi it was replacing (see below). 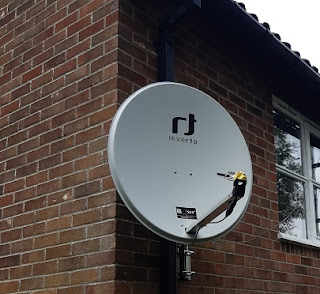 It took a few attempts to get the dish accurately aligned for maximum signal strength. The performance was a modest improvement over the previous yagi, although not stunning. I put out a CQ call using CW and got a reply. After the subsequent QSO I got called up by another station. So it clearly works, but there is still room for improvement. I suspect the beamwidth of the yagi feed is still too narrow for optimum illumination of the dish. There will also be a loss of 3dB due to using linear polarisation instead of circular. I have ordered a small patch antenna which I am going to try next.
My Adventures in Satellite Communications - Part 6 (patch feed)


Disclaimer: This is my personal blog. Views expressed in my posts are my own and not of my employer. The information provided comes with no warranty. I cannot be held responsible for the content of external websites. Any practical work you undertake is done at your own risk. Please make health and safety your number one priority.
aerial antenna ham radio QO-100