I guess this all started after I built my portable ‘suitcase’ HF radio.

Inspired by the SOTA programme, I started taking the radio with me on walks to local hilltops around Wiltshire. I could work CW, SSB and PSK using an end-fed wire aerial. The purchase of a suitable bike pannier enabled me to take my radio gear further afield (I don’t drive).

An item on BBC’s Countryfile alerted me to the concept of ‘bikepacking’, i.e. backpacking with a bike. Bikepacking is distinct from traditional bike touring in that mountain bikes are used and this usually means that luggage is parred-down and usually strapped to the bike rather than just being carried in panniers on racks. In fact, many bikepackers do not even take a tent, preferring to sleep under a ‘tarp’ (tarpaulin).

I thought I would have a go at bikepacking, but combining it with hillwalking and amateur radio operating. The natural destination for a ham radio bikepacking adventure would be somewhere with lots of hills, so I made plans to visit the Brecon Beacons in Wales, travelling by bike and train, and sleeping in a lightweight ‘adventure’ tent. This is my bikepacking diary.

Left home at 08:20, starting the first leg of the journey, an hour-long cycle ride to Chippenham railway station. It was raining and had been all night, so the paths were very wet and muddy. Unfortunately I had got it in my head that the train left at 09:35, but in fact it went at 09:16. So not only did I miss this train but missed all the connecting trains, seat reservations and cycle reservations. Oh well. I re-planned the journey, starting with the 09:45 from Chippenham. I took ‘pot luck on the availability of cycle spaces on the various trains. Changing at Bristol Temple Meads and Newport, I arrived at Abergavenny around 12:00 noon. 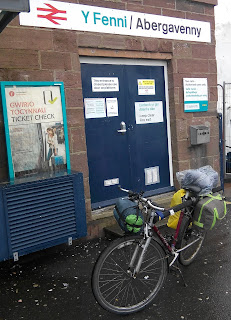 Taking a bike on a complicated train journey in the UK certainly has its challenges, late platform changes and blocked cycle storage areas being a couple of them. However I did get to meet some interesting people, other cyclists for example. After eating at Abergavenny station I began the long ride to Pencelli where I would be camping. Even though I had the Viewranger phone app to guide me, I found the cycle route out of Abergavenny rather confusing. It was a lot more straightforward once I got onto the canal towpath, which the route followed for most of the journey to Pencelli. It was raining for most of the journey, but eased off around 4pm. 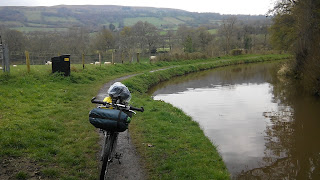 The Pencelli Castle campsite is just amazing. On arriving I checked if it would be okay to set up a portable radio mast near my tent. After setting up camp I made for the local pub for hot food and beer. 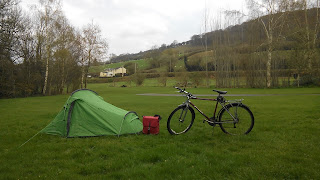 Set off early and rode to the cafe at Talybont on Usk, where they serve an amazing breakfast. There is also a small shop and a bike hire business. Most of the rest of the day was taken up with a circular walk to Bryn hill, starting at Pencelli. I took the radio gear with me and did a little VHF and HF operating from the hilltop (locator IO81HW). 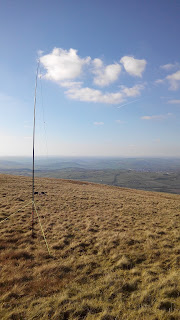 Earlier in the day I got a local bike shop to replace the worn-out (bearing-less!) pedals on my bike. I had tried to do this before setting off on the journey, but had trouble removing the old pedals. Unfortunately the threads in the aluminium crank were shredded in the process of removing the RH pedal. I thought I might be able to fix this using PTFE plumbing tape before I started my return journey the next day.

When venturing out of the tent in the morning the ground (and tent!) was covered in a hard frost. I was surprised by this as my new 3-season sleeping bag had kept me pretty warm during the night. The campsite owners lent me some spanners and PTFE tape and I tried to get the pedal to fit tightly into the crank, but to no avail. Then I remembered something from the ‘cult’ novel “Zen and the Art of Motorcycle Maintenance”. In the book they repair a motorbike using a shim cut from an aluminium beer can. I cut up a beer can with my Swiss army knife and made shims to put around the thread in the hope that this would make it tight enough. Again, to no avail, the shims shredding when I tried to cycle. My next idea was to replace the pedal with a ‘peg’ made from a sturdy ½” bolt. If I put a metal or plastic tube over the bolt this would act as a crude bearing. I did some ham radio operating from the campsite while waiting for the next bus to Brecon, where I hoped to find the parts I would need.


I found a great hardware shop in Brecon where I could buy suitable nuts and bolts. The man in the shop even provided some plastic tube (from a till roll holder!).

After fixing up the bike and packing up camp I set off towards Abergavenny, stopping at Talybont for breakfast.


The weather was good for the return journey and there were great views of the sunlit mountains to the East through the tall trees alongside the canal towpath. 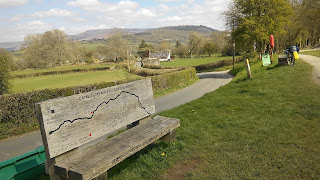 My smartphone was essential for this trip, being used for navigation, photography, PSK operation and keeping in contact with family. The excellent Viewranger navigation app eats batteries so frequent recharging was necessary when using this. For recharging I used a “Solarmonkey” and a “Juicebank”. The Solarmonkey took advantage of the sunny weather and the Juicebank could be charged from a USB charger whenever the opportunity arose. The campsite had USB chargers built into the lights in the washroom and I could get the odd sneaky charge of the Juicebank in pubs and cafes. The HF radio was powered from 10 NiMH 2500mA cells which, with intermittent use, lasted the whole four-day trip. All batteries were fully charged before leaving home including power packs, cycle lights and VHF/UHF radio.

If I was measuring the success of this trip just on numbers of 2-way contacts and DX worked then it would probably be classed as a failure. However, in terms of fun had and experience gained it was a success. The main equipment used was:
While in the Brecon Beacons I had a handful of contacts on 2m (FM) and 40m (CW & PSK).

Books I found useful for information and inspiration:


Disclaimer: This is my personal blog. Views expressed in my posts are my own and not of my employer. The information provided comes with no warranty. I cannot be held responsible for the content of external websites. Any practical work you undertake is done at your own risk. Please make health and safety your number one priority.