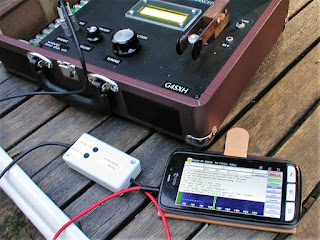 I was alerted to the possibility of portable PSK operation using a smartphone after reading Jamie Davies’ book “SOTA Explained: a beginner’s guide to hilltop radio” (published by the RSGB). Popular smartphone PSK apps are PSKer (iPhone) and DroidPSK (Android). I decided to build an interface for my Android phone to operate with my uBITX portable HF transceiver.

The interface would go between the headset jack on the phone and the mic and headphone jacks on the transceiver. Such interfaces typically include level conversion, galvanic isolation and ‘VOX’ PTT operation. The VOX operation switches the transceiver to transmit when audio is detected from the phone. Since I would only be using the phone with internal batteries I decided there should be no need for isolation, with the associated bulky transformers. Several of the designs that can be found on the internet require power for the VOX circuit. They seem to operate by ‘stealing’ power from the electret microphone bias voltage provided by the phone. For example the Wolphi-Link interface requires a bias voltage of at least 1.4V. After looking at several different circuits I found one that did not use transformers or require the DC bias voltage.

In the simple circuit by Ivo Brugnera (I6IBE), a switching transistor is turned on by the rectified/smoothed audio from the phone and this then operates the PTT (http://www.radioamatoripeligni.it/i6ibe/android/interface.pdf). In the original circuit the audio from the phone will be clipped by a diode across the headphone terminals, potentially causing distortion. I added a 4.7uF series capacitor between the phone and the diodes, thus making this into a proper charge pump circuit, and raising the voltage available for switching the transistor. I also used Schottky diodes to reduce the voltage drop (see schematic below).

In a further effort to improve sensitivity I tested several NPN small signal transistors from my lab stock and selected one that had the highest measured current gain, a BC183L.

RV1 is wired in an unconventional way. I am not sure why, but similar configuration appears in other interface circuits on the internet.

I added C5 as an EMC precaution.

My phone (Doro Liberto 820) seems to rely on looking at the resistance across the microphone input to determine if a headset is plugged in. If this connection is open circuit or a very low resistance the phone will switch to the internal microphone.

Most Android phones use a “TRRS” 4-pole 3.5mm jack for connecting headphones or headsets. Be aware that there are at least two wiring configurations for the TRRS ‘standard’. My phone is wired according to the diagram below. I bought a short TRRS extension cable and cut the socket off one end. The connection to the transceiver is via a screened multicore cable.

The circuit was constructed on a PCB and mounted in a small plastic enclosure. Two holes in the lid give access to the Tx and Rx level potentiometers. The holes are sealed with blind grommets. 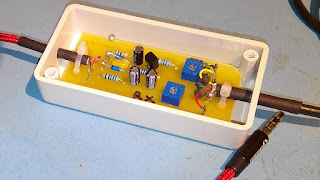 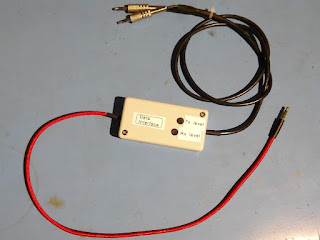 Before using the interface it is important to adjust the Tx level. Overdriven transmitters can cause spattering. My phone needs to be set near maximum volume to operate the PTT, so calibration (and operation) is done with phone on maximum volume. I adjusted the Tx level with a power meter and dummy load connected to the transceiver aerial socket. With the radio set to 14.070 MHz I set the DroidPSK app to Transmit and adjusted the level to well below maximum output. With the output modulated (e.g. by starting a CQ call) I checked that the peak RF output was still below the maximum. I then checked it for all the other bands I would be using.

The setting of the Rx level is not critical, although with the pot set very low my phone switches to the internal microphone (see note above).

My uBITX transceiver works great with my phone, the interface and the DroidPSK app. During testing I made contact with several European stations on PSK31 and PSK63.

Disclaimer: This is my personal blog. Views expressed in my posts are my own and not of my employer. The information provided comes with no warranty. I cannot be held responsible for the content of external websites. Any practical work you undertake is done at your own risk. Please make health and safety your number one priority.
ham radio PSK UBITX