For several years the EF-10/20/40 MKII “EndFedz “ has been my main station antenna for HF. It is basically an end fed half wave dipole on 20m/40m and an end fed full wave dipole on 10m. The antenna is effective and the materials and construction are of a very high quality. However, a key restriction is its 25W power rating, due to the small matching transformer. A lot of radio amateurs have made similar antennas to this with larger transformers for higher power handling. Dutch radio amateurs in particular have been active in this area:
John, PD7MAA's blog -
http://pa-11019.blogspot.com/2012/04/149-transformer-for-endfed-antennas-35.html

So I built myself an improved replacement matching transformer. In fact, this was the second one I had built, as I had also made one for a 30m/15m end fed antenna.

* "Bifilar wound" means that the primary and secondary wire are twisted together before winding onto the toroid. This reduces the leakage reactance and improves coupling. 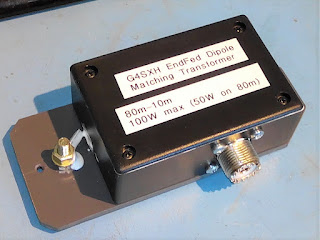 Before winding the coil I wrapped the toroid with PTFE tape. This was a (probably unnecessary) precaution to improve the insulation, since the transformer may be operating at fairly high voltages.

Most constructors seem to use the reverse winding technique as illustrated here:

http://pa-11019.blogspot.com/2012/04/149-transformer-for-endfed-antennas-35.html
This practice seems to originate from designs for common-mode chokes (baluns). The original idea was that this would reduce the interwinding capacitance by physically seperating the start and the finish of the coil. I am not convinced that this has any real benefit, since it all depends on the density of windings around the core. In fact, I wonder if the method may increase the leakage reactance, hence I did not bother using this technique for my transformer.

The 'hot' end of the secondary winding connects to the end of the antenna via M5 stainless steel hardware.

I made the backplate from 3mm plastic. The box lid and all holes were sealed with RTV silicone sealant. It is important to use a sealant intended for electronics applications. Standard silicone bathroom sealant contains acetic acid (you can smell this) which reduces the cure time, but can corrode electrical connections. As an added precaution I put a small bag of silicone gel crystals in the box to absorb any moisture that might still get in there. Commercially-made matching transformers and baluns are usually encapsulated with some kind of resin, presumable to make them waterproof. I am not convinced this is a good idea. Since potting compounds will have a much higher dielectric constant (permittivity) than air, I would imagine this would increase the interwinding capacitance, thus lowering the self-resonant frequency.

I will be covering the upgrade of the EFHW antenna wire and loading coil in a future post.


Disclaimer: This is my personal blog. Views expressed in my posts are my own and not of my employer. The information provided comes with no warranty. I cannot be held responsible for the content of external websites. Any practical work you undertake is done at your own risk. Please make health and safety your number one priority.
aerial antenna ham radio