Posted by Laurence on August 26, 2018
Adjusting the Microphone Gain

Like several other UBITX builders, when testing I found that there was inadequate Tx drive on SSB. The solution is to increase the gain in some way, but by how much?
It is difficult to be too scientific with this, as drive will vary greatly depending on your proximity to the microphone and how loud you talk. It is also difficult to measure peak RF power accurately. On 10m band, talking normally about an inch (2.5cm) from the mic, the RF power meter peaked around 0.3W. On CW the transmitter was putting out around 5W, so thought I would try and increase the gain to get 5W peak on SSB. So the power would need to increase by a factor of 5/0.3 = 16.7. Power gain is proportional to voltage gain squared, therefore voltage gain would have to increase by a factor of √(16.7) = 4.087, let's call it 4. How do we increase the gain? Apart from upgrading the electret mic capsule, the options are:
a) adding some additional amplification built into the microphone
b) modifying the microphone amplifier on the UBITX main board.

I decided to modify the UBITX as I thought this would be easier. A schematic for the original microphone amplifier (v4 board) is shown below. This is a class A common-emitter amplifier with a voltage gain approximately equal to R65/R63, i.e. around 21 with the original component values. We are looking to increase the gain to 84 (4 times 21). Increasing R65 would increase the gain, but would also increase the output impedance. Reducing R63 would also increase the gain. Using our simplified gain formula it might look like reducing R63 to zero would give infinite gain! This is not the case due to the intrinsic emitter resistance of the transistor, which is effectively in-series with R63.
Emitter resistance re = 25/Ic  where Ic is the collector bias current in mA.
Ic is around 1.7mA, so
re = 25/1.7 = 14.7 ohms
Shorting out R63 leaves only the intrinsic emitter resistance, therefore
Gain = R65/re  =  1000/14.7 = 68

The SPICE simulation gave a significantly lower figure of 47. 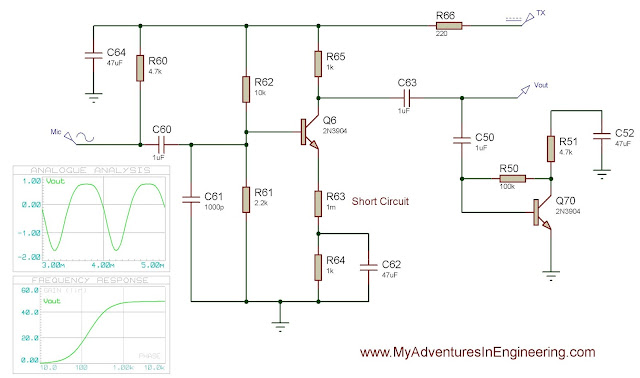 In practice, shorting out R63 did give significantly more drive on SSB. However, on-the-air reports and tests with a nearby HF receiver showed that the audio was thin and a little distorted. I decided to dig out my function generator and do some proper bench tests with a pure sinewave input to the mic input. The results showed that:
The test setup is shown below.

After a bit of research I discovered that the transmit audio frequency response is affected by the BFO setting. This can easily be changed through the UBITX menus (I am using v4.3 firmware). My default was set to 11.995MHz, so I adjusted it to 11.996. Bingo! - the measured frequency response is now 400Hz to 2.5kHz on both LSB and USB and the audio sounds a lot better. I suspect that there will be variations in the UBITX crystal filter characteristics between batches, and some UBITX builders will need to adjust the BFO from the default value. I will be interested in hearing what other peoples experiences are.

In analysing the UBITX circuit (v4) I am a bit concerned about the effect that Q70 might have on the transmit audio. Q70 is part or the Rx audio circuit and is not powered when in Tx mode. However, its base-emitter junction is still connected across the transmit audio output, and will cause distortion for mic amplifier outputs above around 500mV peak. The asymmetrical distortion this might cause was confirmed by my SPICE simulation. You might say this is a design fault. 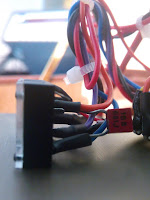 
Whilst testing the transmitter on SSB using a real aerial there were some problems with RF feedback via the microphone cable. Note that, like a lot of microphones these days, the cable is not properly screened. After some experimentation with decoupling capacitors, I found that the problem was due to RF picked up on the PTT line rather than on the audio connections. The final solution was a 680pF capacitor between the PTT line and ground, with the capacitor mounted on the microphone jack (see photo).

CW operation will be covered in a future instalment.

Disclaimer: This is my personal blog. Views expressed in my posts are my own and not of my employer. The information provided comes with no warranty. I cannot be held responsible for the content of external websites. Any practical work you undertake is done at your own risk. Please make health and safety your number one priority.
UBITX